Imagine a world where spiritual forces determine your eternal future... and be glad that God has a different plan.

The Warehouse production is providing opportunities for film students to work on a full-scale feature film and to gain practical experience by working side by side with industry professionals.

A Gen-Xer, living in his parent’s basement, is compelled by his father to get a job or get out. The sluggard’s father answers a classified newspaper ad for a nightshift warehouse worker and sets up an interview for his couch-potato son. To make his father happy, the son takes the interview and is hired the same day, only to find out after it’s too late, that he now works in a warehouse-time-vortex where people pay for their gravest sins in a never-ending shift.

Artie Watson is an unemployed 25-year-old who lives in his parent’s basement while he waits for work to magically fall into his lap. He spends hours on video games at night with his best friend and mostly sleeps during the day. Artie’s Dad, Frank is a gung-ho Marine vet who wants his son to get a job and get back on his own two feet. After six months of mooching, Frank sets up a job interview for Artie via an ad in the local paper for night shift warehouse work. Artie takes the job to get his dad off his back.

On Artie’s first night of work he meets his hard-as-nails boss, Bell, who cuts no one any slack. Artie also meets Mallory, a babysitter with a drug habit. She has brought her 10-year-old  client, "Boo" to work with her. Artie soon learns from Boo that this is no normal warehouse as the people who work there are trapped, but don’t realize it. They are being tested and punished for their gravest sins. Boo explains that Artie must discover why he is there - He must face his gravest flaw. By choosing to change, Artie can escape at the end of his shift… and take Boo with him.

Once Artie and Boo hatch their plan of escape, Bell is there to thwart it with temptation and force. Through some quick thinking, the help of a talking doll and an undercover angel, Artie and Boo escape to freedom, only to find they have now landed years into the future.

PLEASE PARTNER WITH US BY GIVING AND THROUGH PRAYER!

Courtney was placed in foster care at 6 months old. Her mother was incarcerated and her father was a pimp who had no use for a baby. She was permanently placed in a good home with a pastor and his wife at age 7. All was well until an older cousin began to come and spend the night. She molested her over and over again during the years she visited the family. Courtney says the abuse was so traumatic that it became part of her identity. She sat in church listening to sermons about sin and wondering if she would go to hell.

As a teenager, promiscuity, drugs, alcohol and trouble with the law became too much for her foster parents and she was sent back to her biological father at age 15.

Hear her heartbreaking story of being trafficked for sex, living on the streets and finally finding freedom in this first episode of our series on survivors.

IT'S TIME TO LISTEN!

Society says you should lie or hide. What would you do?

(Try walking a mile in their shoes).

God, Am I Gay? is a documentary film series of conversations with people who have wrestled with their sexual identity.

The sad news is that 1 in 3 people who have a sexual identity crisis and are also religious, may attempt suicide.

We hope that this film series can change that statistic.

Please support this series with your donation today. 100% of what you give goes towards the film production. 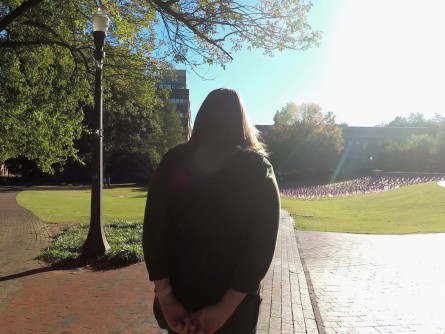 LOGLINE: What happens when a young woman finally faces a question she’s avoided for years; God, am I gay?

She’s been a church youth leader, a missionary, a chaplain and a marketing and communication specialist. Amanda Kerr is a passionate, 29-year-old follower of Jesus Christ who is now beginning her vocation as an ordained Christian minister. Her journey to seminary and ordination has held many difficult decisions. But what has that journey been like for Amanda? Would anyone wish to walk a mile in her shoes? This film gives a glimpse of Amanda’s journey in her own voice.

This series of documentary films are conversations with people who have faced a sexual identity crisis. When religious beliefs and personal experience clash, the crisis of heart, mind and soul can be a torturous journey for many.

“Based on data from more than 21,000 U.S. college students, researchers found that greater religious feeling and engagement was tied to increased risk of suicidal thoughts and actions for participants who identified as LGBTQ”.